Intel's speculative execution flaws go deeper and are harder to fix than we thought.

Another bad news from the world of CPUs. Time to go for cpuless computing? I'm sure this flaw isn't the last one. Crossing fingers for all sysadmins out there that patching goes well.

We look at the Pod Lifecycle Event Generator (PLEG) module in Kubernetes and show how to troubleshoot various issues.

Been there, done that. This PLEG thingy can keep you busy as a sysadmin.

At a glance comparison of every major Explorer release

From time to time it's cool to look back. And such episodes are always fun to read and to remember good old days. Yes, I worked with Windows 3.11 when it was the current version, I still remember how it was. Playing my first ever MP3, downloaded over dial-up with something called Napster. This even worked on Windows 3.11 back then. And I gained my first "serious" sysadmin experience with Windows NT 4.0. Bluescreen because of plugging in a USB device? Just usual back then...

If you’re a bit like me, you’re probably impatient. You want things to move quickly. There’s no time to waste!

Yes! Before I send an E-Mail, publish a post, commit a documentation page, ... I re-read what I've written. And if I had to correct things, I re-read it again and so on, until I'm confident that it's worth sending.

Gitception is the idea of putting your Git repository in a Git repository to see what Git does when Git is used. It is a different approach to learn Git. Git is not a tool that just works. Most users memorized a list of commands to sync up but don’t know what happens. It may throw errors at some point or you might get lost with branches. Therefore it certainly helps to understand how it works and that, for example branches are no magic, delete a branch is not dangerous and why creating branches is so fast. To see the internals of Git helps you learn the concepts behind and can create aha-moments because if you are in a situation that doesn’t follow the happy path you would have expected, you will be able to understand what is happening and why.

This is a cool idea to discover what Git exactly does. I'm by far no Git expert, but having some understanding of how it works certainly helped me with my daily Git usage.

You can list a directory containing 8 million files! But not with ls.
#linux, #sysadmin, #debugging

TLDR: Write a C program that calls the syscall getdents directly, with a large buffer size, ignore entries with inode == 0.

Interesting read about the inner workings of Linux and filesystems.

Hacker News, a simple link aggregator owned and operated by Silicon Valley startup incubator Y Combinator, has had many positive effects on SV startups and engineers as a whole. On Hacker News, users receive Karma whenever another user upvotes a submission or comment they made, which incentives positive contributions to the community. However, in maintaining its simplicity, many new features and behaviors added over the years on Hacker News are not fully documented other than the occasional comments from staff. This list details some of the hidden norms about Hacker News not otherwise covered in the Guidelines and the FAQ, along with a few bonus features outside of typical HN usage.

Git serve: I would like it that simple - Stack Overflow
#git, #server

I want to know how to simply publish over http = much like Mercurial's hg serve!

This post looks at the relative strengths of Intel and ARM as it relates to object storage. Specific attention is paid to single core vs. multi-core.

ARM might see a bright future. Why? See first link of this Newsletter issue.

The hiatus is real – There were so many articles piled up in the stack that I decided to restart from scratch and just pick a few that I ran into the past few weeks. From bash-scripts to AWS EC2 Spot instances to the usual surveillance topics. Enjoy

My friend Bastian is collecting links as well and publishes them on his blog. This is the latest issue.

How to upgrade a Dragino LGT-92 GPS Tracker with an ST-LINK/V2 under Linux.

I wrote something about updating the firmware of a Dragino LGT-92 GPS tracker.

A project that subscribes to MQTT queues and published prometheus metrics.

Ghostunnel supports two modes, client mode and server mode. Ghostunnel in server mode runs in front of a backend server and accepts TLS-secured connections, which are then proxied to the (insecure) backend. A backend can be a TCP domain/port or a UNIX domain socket. Ghostunnel in client mode accepts (insecure) connections through a TCP or UNIX domain socket and proxies them to a TLS-secured service. In other words, ghostunnel is a replacement for stunnel.

UtahFS is a state-of-the art encrypted storage solution, meant to be similar to Dropbox. It has a FUSE binding that creates a synthetic drive on the user's computer that they can interact with like an external hard-drive. Files stored in the drive are uploaded to a cloud storage provider, which means the drive will never run out of space and minimizes the likelihood of any files being lost. However the files are encrypted such that the cloud storage provider knows almost nothing about what's being stored.

theryangeary/choose: A human-friendly and fast alternative to awk and cut
#awk, #shell, #rust

This is choose, a human-friendly and fast alternative to awk and cut

A collection of tools for developers who have little to no artistic talent. Join the movement #nodesigndev. Follow @nodesigndev

The sound volume control knob made of concrete, with RGB LED lights.

Who doesn't want to have A KNOB?

SSH can normally forward local and remote ports. This service implements an SSH server that only handles forwarding and nothing else. The service supports multiplexing connections over HTTP/HTTPS with WebSocket support. Just assign a remote port as port 80 to proxy HTTP traffic and 443 to proxy HTTPS traffic. If you use any other remote port, the server will listen to the port for TCP connections, but only if that port is available.

Basic.css gives you basic CSS formatting and ability to make basic grids with only HTML5 syntax. You can use this project to Set your default styling.

This issue talks about many things around Kubernetes, the Corona contact tracing app and contains a lot of good articles to read. Not too much personal comments this time. 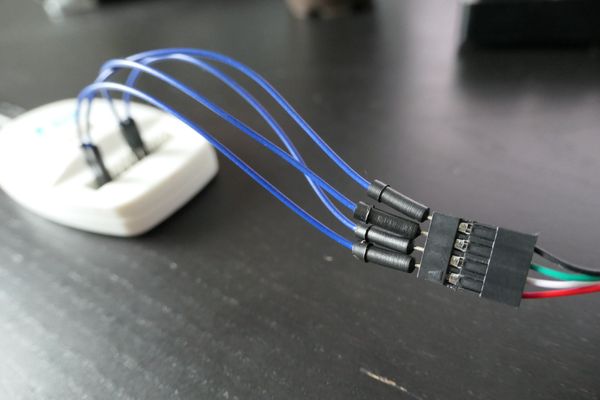 How to upgrade a Dragino LGT-92 GPS Tracker with an ST-LINK/V2 under Linux.